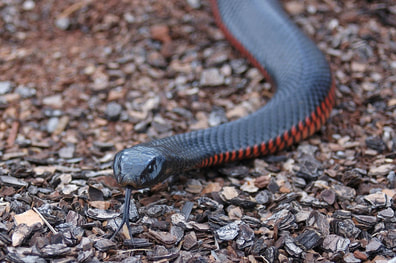 In South East Queensland, we have the risk of a few different snakes, and many with the potential to harm your pet.  The most common is the Eastern Brown snake, followed by tiger snakes, found in the wetter parts of southern and eastern coastal Australia, especially near water. Other snakes include black snakes, red belly black snakes and taipans.

The Eastern Brown snake (Pseudonaja textilis), is very common, and can be a hidden danger, even in your own suburban backyard.

“One of the most commonly encountered large snakes in Brisbane, this species has adapted well to urban and rural environments.  Nervous and very dangerous if provoked”. Wildlife Answers.com.au

The diet of the Eastern brown usually consists of frogs, reptiles, birds and mammals and they kill through envenomation and constriction.

In Southeast Queensland as already mentioned, we have several varieties of snake.  With these different snakes, the effect of the venom can be quite different.  Snake venom can contain a neurotoxin – this causes paralysis, and an anti-clotting agent – this causes bleeding.  Tiger snakes also have a toxin that breaks down muscle, and this in turn causes damage to your pets kidneys.

So what should you be looking for if you suspect a snake has bitten your pet?

The signs can vary and depend on factors including snake type (obvious), venom injection, and location of the bite.  It has been reported that bites that are closer to your pets heart, have a quicker spread of venom throughout the body.

As a general rule, cats are usually more experienced hunters and more agile then the canine counterparts, receive bites on their legs or paws.  However, dogs through curiosity usually try to chase, and even kill snakes.  Because of this most dogs will be bitten on the face or jaw.

If you suspect your pet has been bitten by a snake the signs you should look for include:

OK, my pet dog/cat has been bitten.  What do I need to do?

In Brisbane, few vets will have anti-venom on hand.  Veterinary hospitals such as Veterinary Specialist Services (07 38417011) and the Animal Emergency Service (07 3423 1888) usually carry the anti-venom.  Phone them first to advise you are on your way.  The only treatment for snakebite is for the vet to give the anti-venom as soon as possible to your pet.  Tests can be performed to determine the snake, or a multi-valent anti-venom may be used.  The anti-venom is given intravenously and the sooner treatment is begun, the more likely your pet will survive. Your pet will need to be hospitalised in intensive care to monitor for signs of further deterioration and supply supportive care during this time.

While in transit to the Veterinary centre, it is vital that you keep your pet as calm as possible.  This includes carrying your pet and not allowing them to walk/run – this will help slow the venoms spread through the blood stream.  If the bite is on an extremity (leg/tail) you can apply a pressure bandage – the bandage needs to be firm, but not so tight that it cuts of blood supply to the area.

Never apply a tourniquet, an icepack, wash, suck out or cut the bite site.

Can you prevent snake bite?

Snakes are most prevalent in bushland areas, or areas that contain long, un-mowed grass.  Avoid taking your pet to areas that are likely to have snakes, including creeks and overgrown parks. If you must, stay on open paths and keep you dog on lead.

At home, keep your lawn trimmed, and be vigilant and careful when disturbing sheltered areas, including moving logs, rubble, wood and junk piles.

If you have chickens or compost heaps, keep the rodent population under control. Use contained compost enclosures and rat mice wire and underground walls for the chicken coop.